Adobe Animal Hospital was founded by Dr. Dave Roos in 1964. The one doctor hospital was originally located at 396 First street in Los Altos. The practice originally saw dogs, cats and horses.

In 1965, Jerry Berg joined the practice and the 2 veterinarians were partners for 37 years until Dr. Berg’s retirement in 2002.

Over the years, the popularity of Adobe Animal Hospital grew and more veterinarians were added. The hospital expanded services to 7 days a week and began offering 24 hour care in 1992.

In 1994 the practice was remodeled to accommodate 8 veterinarians. In 2010 with 23 veterinarians and 150 support staff, we had outgrown the location on First street.

Adobe moved to 4470 El Camino in Los Altos which originally was the Elephant pharmacy building. The new veterinary hospital, which won a merit award for hospital design, has 18 exam rooms, a 3 station dental suite, 3 surgical suites and a large well equipped ICU. 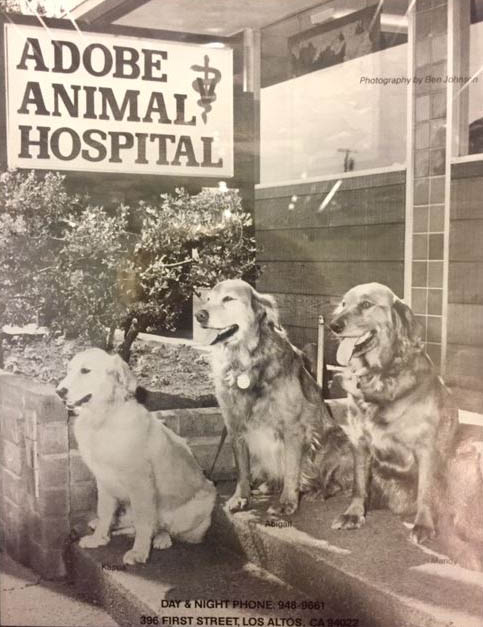 Dave Roos retired in 2014 and the hospital is now  managed by Summer Burke-Irmiter, Paul Eccles and Brian Maxwell.  Demand for services at Adobe continued to grow and in 2015 we opened our second animal hospital in Los Gatos on Los Gatos Blvd and Blossom Hill. In addition to the hospital, Adobe opened the Veterinary Medical Marketplace which carries veterinary diets, medical products and offers informational seminars.

Adobe is blessed with a wonderful staff that offers a team approach to patient care. That coupled with dedicated clients who want exceptional care for there pets is the reason Adobe continues to grow.

In 2020 Adobe partnered with SAGE Veterinary Centers. Our partnership is based on a shared passion to offer the best comprehensive pet care to all of the pets in the Bay Area. Together SAGE and Adobe are dedicated to promoting the highest quality of care along with a compassionate pet parent experience. Our two amazing teams will combine our knowledge, passion and experience to make us the premier vet hospitals in our communities and in our industry.